Peloton: Cycling into the Future 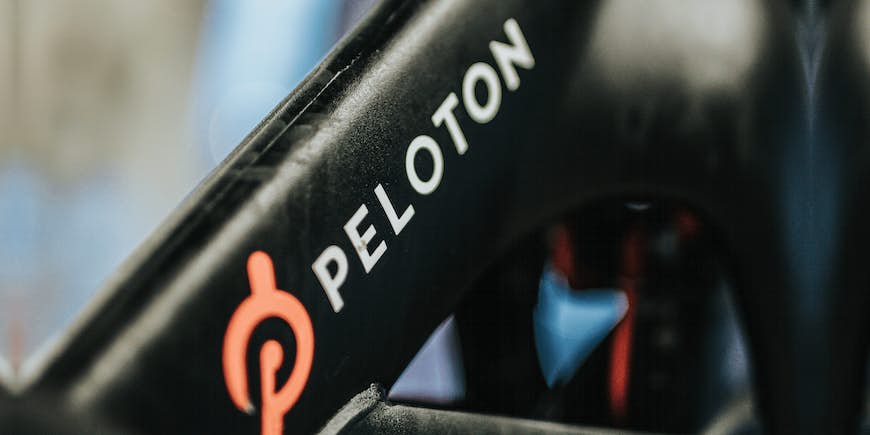 Peloton is a brand synonymous with innovation. Merging cutting-edge workout equipment with the boundless possibilities of digital technology, Peloton has emerged as a leader in its field.

A sports brand that is committed to pushing boundaries and going for gold, Peloton unveiled a star-studded marketing campaign for the Tokyo Games of summer 2021 (pushed forward from 2020). It’s worth mentioning, at this point, that without being an official sponsor, brands are banned from using Olympic athletes in their marketing campaigns—because of a little clause called Rule 40 (explained further below).

Not easily deterred from such roadblocks, Peloton exploited a softening in the rules to develop a campaign designed to stand out as it connects fans and athletes together through the Peloton personal workout technology.

Here we take a look at Peloton’s road to success and explore its unique Olympic marketing initiatives.

But, first, some background.

The triumphant rise of Peloton

"Peloton uses technology and design to connect the world through fitness, empowering people to be the best version of themselves anywhere, anytime."

After struggling to find exercise classes and equipment that covered all of their requirements, Peloton founders Graham Stanton, Hisao Kushi, John Foley, Tom Cortese, and Yony Feng pooled their collective talents to bring immersive, tailored workout experiences to the home.

Peloton’s journey started in 2012 and after two years of planning and development, Peloton launched the world’s first exercise bike connected to on-demand exercise classes—a forward-thinking concept that earned the brand 100,000 devoted subscribers by 2017.

The upsurge of home workout interest during the Covid-19 pandemic earned Peloton a significant boost in exercise equipment sales and workout app subscriptions. Indeed they could boast of a 232% year-over-year growth in 2020.

Some consumers buy a Peloton bike and subscribe to the brand’s community workout app, while others use the app as a standalone exercise aid. Indeed, some fitness fans have even saved money by making DIY Peloton-style bikes—both scenarios boost brand awareness and drive revenue. Joe Biden made a splash by causing something of a headache for his security detail when he wanted to move his Peloton into the White House with him in January 2021.

Seen by many as a luxury brand (mainly due to the fact that it’s more expensive than its competitors), Peloton’s professional home workout app has certainly made the brand more accessible in recent years. But, despite its solid business model and global brand awareness, Peloton hasn’t always gained positive publicity for its marketing efforts.

While many saw the narrative of a man giving his wife the gift of exercise to be offensive, others struggled to see the sexist undertones—opinion was split and the ad went viral anyway.

This festive marketing campaign may have shone Peloton in a far from glistening light, but it did earn the brand a huge boost in brand awareness—assisted by plenty of humorous user-generated content (UCG):

Following the Christmas controversy, Peloton remained strong, enjoying immense sales during the pandemic, despite halting its marketing campaign efforts until after lockdown.

To further cement its success, Peloton launched a brand new marketing campaign in collaboration with the same agency responsible for the infamous ‘Peloton Wife’ ad:

Driven by a collection of hashtags including #pelotonmom, #formerathletes and #Germanlady, Peloton shone a light on its diverse mix of subscribers and users, showcasing its universal, community-driven appeal.

Offering an insight into the lives of nine everyday Peloton users, this intimate portrait was supported by engaging campaign assets including a blog post featuring quotes from everyone featured in the video ad.

This diverse and community-driven marketing initiative earned a healthy level of engagement, with its ‘Meet the Members’ videos racking up hundreds of thousands of YouTube views, with festive exercise equipment demand so strong that Peloton struggled to keep up with demand.

A tragic incident involving the death of a child, as well as 70 reported injuries, by using one of the brand’s treadmills (resulting in the recall of 125,000 treadmills), has placed Peloton in hot water once again. But, the brand is currently responding by setting new industry standards for exercise equipment.

There’s little doubt that Peloton is forward-thinking, determined, and adaptable. So, when the brand saw a way around Rule 40, it threw its marketing resources into the Olympic Games—in epic style.

According to Rule 40 of the Olympic Charter, non-Olympic sponsors cannot use official athletes or participants in their ads, campaigns or promotions from several days before the start of the games until after the event has ended.

“Competitors, team officials and other team personnel who participate in the Olympic Games may allow their person, name, picture or sports performances to be used for advertising purposes during the Olympic Games in accordance with the principles determined by the IOC Executive Board.”

While this is the overarching law, Rule 40 policy has softened in recent years, allowing Olympians and Paralypians to make their own campaign deals with brands outside of the scope of the U.S. Olympic & Paralympic Committee.

Naturally, red tape and restrictions still remain—but this loosening of the rules has empowered sporting brands and organizations to tap into the Olympic spirit. Peloton is no exception.

So, when the brand saw a way around Rule 40, it threw its marketing resources into the Olympic Games—in epic style.

By avoiding any direct mention of the ‘Olympics’ or the ‘Olympic Games’ within its content—following suit from Under Armour’s inspiring 2016 Rio games campaign—Peloton has been able to use big names to create something that cuts through the marketing noise.

During the lead up to the Olympic games users could train with these immense athletes, benefiting from expert training tips while sweating alongside them—an exclusive experience to make people feel more connected to the event while sharing their fitness progress on social media.

Driven by the hashtag #ChampionsCollection, the campaign was supported by a dedicated landing page with background information on each elite Peloton instructor. The sheer profile of these nine top-flight athletes coupled with the brand’s cutting-edge workout technology has made Peloton’s Olympic offering immersive, offering arguably the world’s most intimate virtual Olympic workout experience.

It’s true that Peloton is still seen by some as a brand for the select few, but the brand has made tremendous waves in migrating away from this image in recent times.

The genius of Peleton’s marketing strategy is that the concept almost speaks for itself—it just needs a little push here and there.

The brand’s ability to create a buzz around the Olympic Games and offer fitness fans exhilarating virtual experiences without officially breaking the rules is a testament to its ability to innovate and adapt. By remaining responsive to an ever-changing landscape, Peloton will continue pedalling ahead of the pack for some time.

Webinars:
Webinar: How to Create Marketing Impact with Business Influencers