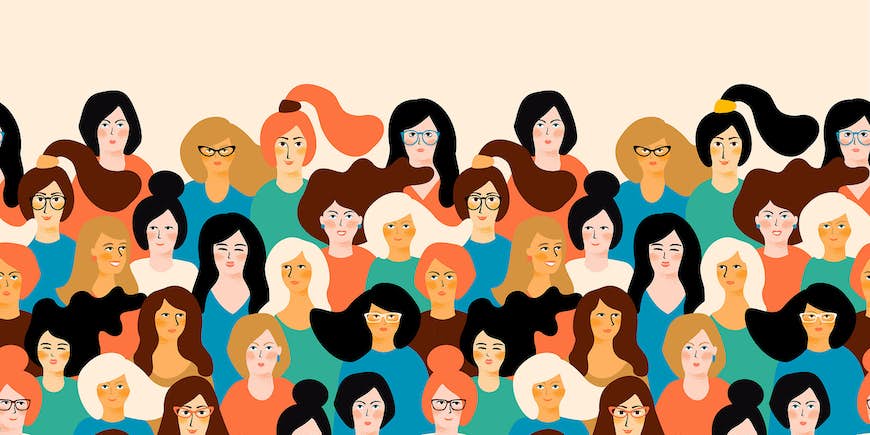 Since the beginning of time, women have found ways to change the status quo.

The list of historical examples is long, increasingly widely taught and beloved by women and girls — enthralled by the influencers who have stood before them.

For International Women’s Day, we decided to add to that list.

Being a female leader in any industry involves a strong set of skills and traits.

Today, we’re looking at the women leading digital disruption — the ones penetrating the distinctly male-dominated tech and digital marketing industries with a special type of courage, imagination, and strength.

While these historical and modern women influencers have taken over different industries and skill-sets across time, there’s one, underlying similarity between all of them:

They are warriors, shaking things up.

What Is Digital Disruption?

In its essence, digital disruption is when an industry undergoes a fundamental transformation in traditional processes and practices. This transformation is invariably caused by emerging business models and new digital technologies.

These new, innovative models and technologies impact the value of existing services and products on the market, which usually unsettles once-dominant companies, effectively forcing change upon the rest of the market.

To give you a few examples, you can look at how Netflix has redefined how we watch television or consider how Uber has turned the taxi industry on its head.

It’s about molding opportunities to make our world a more effective, prosperous, and often beautiful, place.

And that brings us to the rising role of women influencers...

According to a study done by the National Center for Women and Information Technology, in 2015, women only held 25% of all computing technology jobs.

The mere act of changing the demographics of tech employment is a disruption in itself, but this is more than some modern-day balancing of the scales.

Tech and marketing are perfect industries for women looking to impact society in a big way. They demand forward-thinkers who care about social issues and our society’s future, which is why more women are finding their place in these careers.

In this list, you’ll find women influencers in both digital marketing and tech, creating inspiration and showing pure passion in everything they do.

As most people know, Uber has been one of the most impressive disruptive companies we’ve seen so far. However, Jean Liu is giving the world’s most popular rideshare app a run for its money.

Didi is now available in 400 Chinese cities and has a value of $50 billion. Much of this is thanks to the turf war Liu won with Uber, forcing the latter to sell its China operation. Didi reached 1.4 billion rides in 2015, a goal that took Uber five years to reach.

On top of all this joy, Liu ensures that Didi provides opportunities to women to help them rise to the top of the thriving industry in China – a country now viewed as a land of opportunity for women, thanks to people like Liu.

Dara Treseder has an impressive resume for a 30-year-old.

The alumnus of Apple, CMO of GE Ventures and GE Business Innovations recently became the first-ever CMO for the innovative 3D printing company, Carbon. She certainly has a lot on her plate.

In her position as CMO, she’s not only in charge of bringing the brand towards the company’s next stage of development. Dara is tasked with establishing the company as an ingredient brand for discriminating consumers who care about the products’ effects on the environment.

However, she doesn’t just shine through her career.

Dara believes that innovation not only solves corporate but community issues and is passionate about empowering women through health and equality.

As one of Forbes’ 50 marketing chiefs who is redefining the role of CMO and the shape of the future as we know it, Dara Treseder deserves spot #2 on our list.

Red Bull has always been a little bit different. From their quirky ads to their extreme sports affiliations, the Austrian energy drink brand has garnered great success by standing out from the crowd.

Much of its success comes to a customer-centric approach — they want you to believe that life is that little bit better when you have a Red Bull in your hand.

What you may not know is that a huge part of that success comes down to the efforts of a woman, one Amy Taylor. Since starting with the brand back in 1999, Amy has worked her way up to the upper echelons, reaching the role of VP of Marketing.

Out of her Santa Monica office, she leads the brand’s strategic marketing plan, heading up a team that calls the shots on the brand's image and marketing across the planet. Amy was instrumental in launching the innovative Red Bull Media House in 2007, which inspired other disruptors like Netflix and Amazon to start creating media.

That’s right — the actions of Amy and her team may have lit the blue touch paper for Netflix and Amazon Prime. Together, Amy and her team continue to work hard to “give wings to people and ideas”.

But what’s more inspiring about Amy is her opinion on company culture and the role of women in this development.

As she told The Female Quotient, she believes the proper way to define success is through a qualitative lens: by looking at the ones breaking down the status quo, the creative thinkers, the brightest problem solvers.

...And that those different thinkers may be the ones leaving at 4:30 to pick up their kids.

When you think of the stereotypical computer programmer, you probably don’t imagine somebody like Kimberly Bryant.

As the CEO and founder of Black Girls Code, she’s all about changing perceptions. Her company is a non-profit organization that is “changing the face of technology”, making it a personal mission to introduce young girls of color to the tech and computer science fields.

Specifically, it aims to train young black women in these in-demand skills and then facilitate their transition into entrepreneurial ventures.

And why is this needed?

The tech industry has been leaving women of color behind for a while now, with few signs of improving, despite the illustrious history of black women in computing as highlighted in the movie Hidden Figures.

In the study, Women and Girls of Color in Computing, 80% of all new female-run American businesses are managed by women of color. However, in technology, it’s only 4%.

In Kimberly’s own words:

In the digital age, there is no shortage of apps, tools or websites to explore. For newcomers who want to get into the industry, it can be a little overwhelming to know just where to start.

Jessica Naziri recognized this problem and set about solving it. As the founder of TechSesh.co, Naziri heads up a digital magazine that is designed for women and inspired by the latest innovative tech.

She wants to make tech more accessible to other women, and through her magazine, she is empowering other female entrepreneurs by providing them with everything they need in one central location.

Whether it’s the latest smartphone reviews, trending apps or a hot new gadget, you can find it on TechSesh.

The brand has partnered with digital giants like Dell, Intel and Samsung, using video marketing and social media campaigns to make technology relatable and fun for young, aspiring millennial women around the world.

The Future of Digital-Disrupting Women

“Do one thing every day that scares you.” Eleanor Roosevelt

These famous words by Eleanor Roosevelt are likely part of the female-honoring saturation that’s happening all over social media this Women’s day.

A one-liner or not, Roosevelt dug deep, and this inspirational attitude has carried on throughout time.

From groundbreaking designers to space explorers, artists to political activists, women have done something exceptional for humanity, and in the process, have stolen our hearts and fed us continual inspiration.

The future of digital-disrupting women is its own era of inspiration. While women still need to fight for equality, respect and positions, this battle makes them that much stronger.

Add creative minds and barrier-breakers into the mix, and the future really becomes something to get excited about.

Diana Myers is a Candian copywriter, content expert and CBO of her content agency, Quill and Craft. Consumed by the art of storytelling, Diana is on a mission to humanize brands through humor, heart, and CSR practices. When she’s not glued to her laptop, you’ll find her studying ecological restoration, mapping out hikes less-traveled or brewing herbal potions for her reluctant partner.